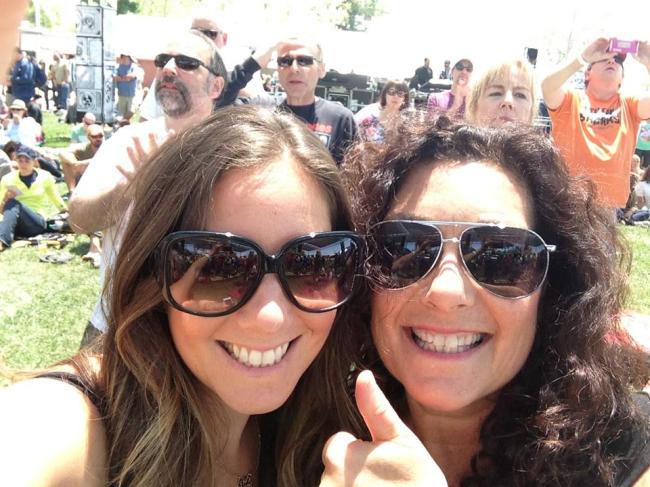 I hadn’t been to a rock concert in over 30 years and I had never been to one that lasted for days.  I spent the first 2 days with my 20 something daughter. We were totally compatible about what bands we wanted in our line up each day and yet we were still met with many surprised comments such as, “You came to a rock concert with your mother?  How cool!” The last two days of the festival I was on my own and I proceeded to bump into local people and meet up with some dear out-of-town friends, you know the ones, the loyal rock ‘n rollers that travel great distances to hear their favorite bands.

It wasn’t hard for me to get to the festival each day. No traffic jams, parking shuttles or hotel rooms. I only had to walk about one mile from my house and there it was just waiting for me to partake. It could not have been any easier.

First, let me confess that I absolutely loved it. And I loved each day so much more than I could have possibly expected myself to at this moment in time. These days I have been priding myself on experiencing much more opera than hard rock but the mix of musical offerings at Bottle Rock Napa Valley (BRNV) while not tame, traversed a musical range that kept everyone satisfied.

What was tame was the crowd—the people that surrounded me were men and women who spanned the age ranges from 15-75, were surprisingly mostly all white folks and polite, fun and friendly. We shared blankets and danced and sang together. People introduced themselves to one another and no one seemed particularly agitated, inebriated or rude. Even when most of the crowd’s smart phones could not send or receive text messages no one seemed to freak out. Lots of people could not find their friends or missed “meet me here” texts but no one let that ruin their fun. Even the people in the long beer lines stayed pleasant.

And now what about the actual music?  I found the performers interesting, thoughtful and thoroughly entertaining. Many of the bands I had never heard of before but some had big enough hits that I recognized a song or two from the set.  One of my favorite newer bands that played at noon one day was the Whiskey Sisters. Two women, Barbara Nesbitt originally with Tim Flannery and the Lunatic Fringe and Teal Collins formerly with the Mother Truckers joined forces to create a great sound and a fun show.

With only 3 stages within a close range, it was a breeze to navigate from one stage to another.  There was also a comedy spot and a smaller stage that had action all throughout the festival days and there was plenty of great food and wine choices to make Napa proud.

The best part about BRNV was the BRNV producers , Bob Vogt and Gabriel Meyers from Willpower Entertainment added a very meaningful twist to the event . They included a philanthropic element to this rock ‘n roll festival. Not only did they promote the idea of giving back to local and national non- profits but they had an entire building designated to showcasing the non-profit organizations that would be benefiting from the charitable proceeds of the event. This was the total rock star element of the festival for me.

So wanna meet me at Bottle Rock Napa Valley next year? They already are selling tickets for May 9-11, 2014!